All Collections
Before You Buy
Common Questions
How does Ecovent work?

How does Ecovent work?

M
Written by Mahesh Choudhury
Updated over a week ago

Before we describe how Ecovent works, let's consider how a typical thermostat works.

A thermostat is a relatively simple device: it measures the temperature in the room in which it is installed, compares that to the set point the homeowner provides, and then makes a decision to turn the heat or air conditioning on or off.

Ecovent operates on a very similar principle, except that instead of making the decision to turn on the air conditioning or heat based on one temperature measurement, the system takes into account the measurements from all the sensors that are tied to a particular thermostat. The benefit of this approach is that every room in the home with at least one Ecovent sensor, including those that are located far from the thermostat, can influence whether or not the air conditioning or heat should be running.

Suppose you have an Ecovent system installed in a home with three rooms, each room has a set point of 70 degrees, and that the system is set to COOL mode. The kitchen is currently reading a temperature of 71 degrees, the living room is reading 69 degrees, and the bedroom is also reading 71 degrees. If you compare the current temperature in each room to its set point you'll see that the kitchen is 1 degree warmer than its set point (+1), the living room is one degree cooler than its set point (-1), and the bedroom is one degree warmer than its set point (+1). The sum of the current temps reveals that the home is too warm by 1 degree. Like our thermostat example above, Ecovent uses an overshoot to prevent excessively short heating and cooling cycles. In this case, with an overshoot of 1 degree, Ecovent would decide to turn the air conditioning on, and would continue cooling the home until the home was 1 degree cooler than the set points, on average. This is just an illustrative example, and in reality there are a number of other checks being performed to determine the optimal times to turn on and off the air conditioning or heat. Essentially, though, Ecovent acts as though each room had its own thermostat, and the decisions of these thermostats are combined to arrive at the final decision.

A second major way that Ecovent provides room-by-room comfort is by opening and closing the vents to control how much conditioned air is delivered to each room. The basic principle for the vent control is simple: if Ecovent is set to COOL mode, and the temperature in a room is above its set point, the vents should remain open. As soon as the temperature in that room reaches its set point, the vents in that room should begin to close, in order to redirect the conditioned air to the rooms that have not yet reached their set points. There are, however, some constraints on how many vents can be closed. Closing too many vents at a time can lead to a buildup of pressure in the ducts. Ecovent constantly monitors the pressure in the ducts, and will only close vents as long as it is safe to do so. 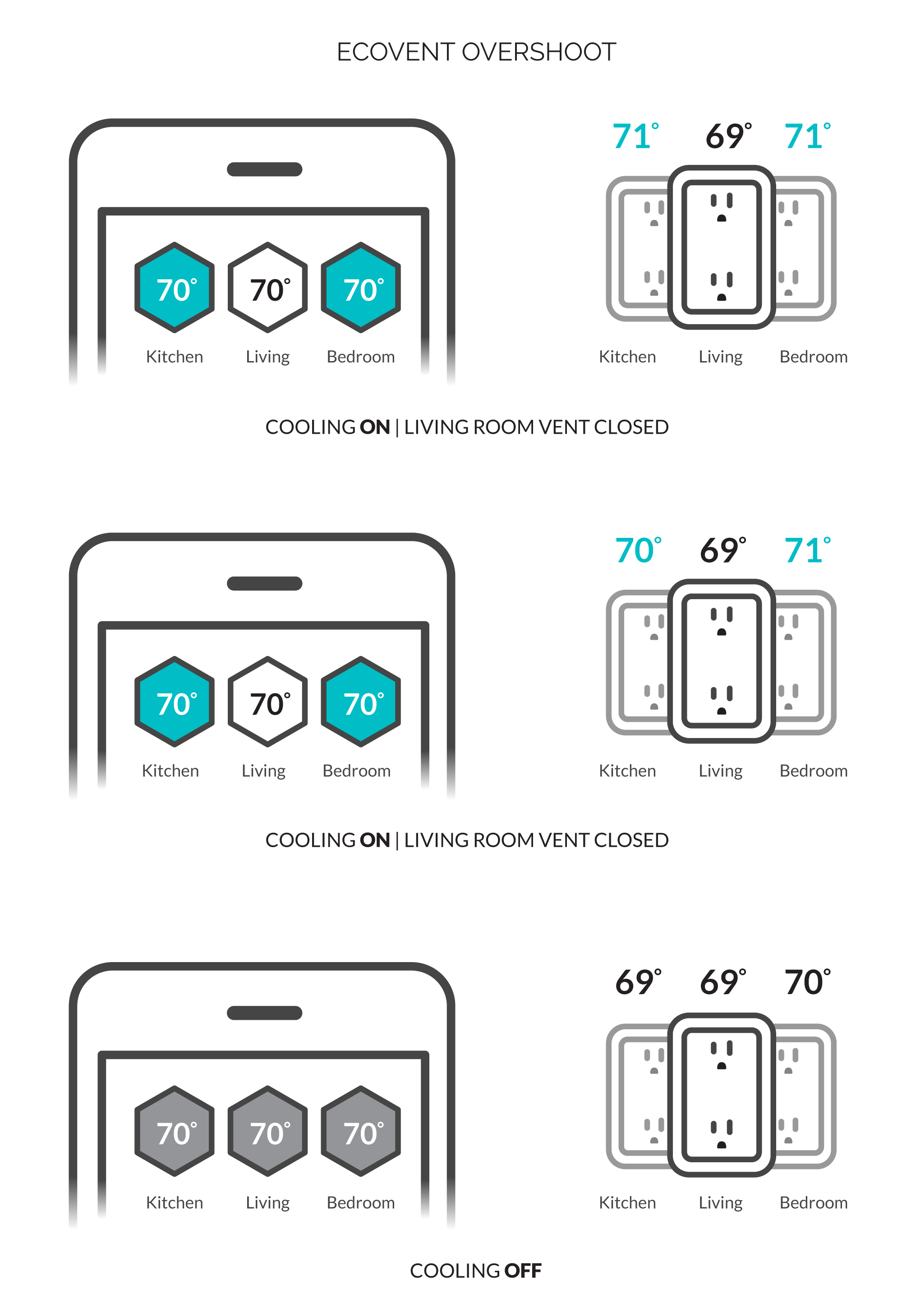 One of the major features of the Ecovent system is the ability to set a room to "vacant". By setting a room to vacant, you are telling the Ecovent system to prioritize all the other non-vacant rooms in the home when delivering conditioned air. Whenever possible, vents in vacant rooms are kept closed. However, due to the necessity of maintaining safe pressure levels in the ducts, occasionally these vents are opened either partially or fully. Vacant rooms do not have a set point and are not included in the decision to turn on or off the air conditioning or heating. Instead, vacant rooms are controlled by the Vacant Room Temperature Range. If Ecovent is set to COOL mode, if any vacant room's temperature rises above the high end of the Vacant Room Temperature Range, the system will turn on the air conditioning. In this way, Ecovent keeps the temperatures of these rooms within a reasonable range.

Did this answer your question?